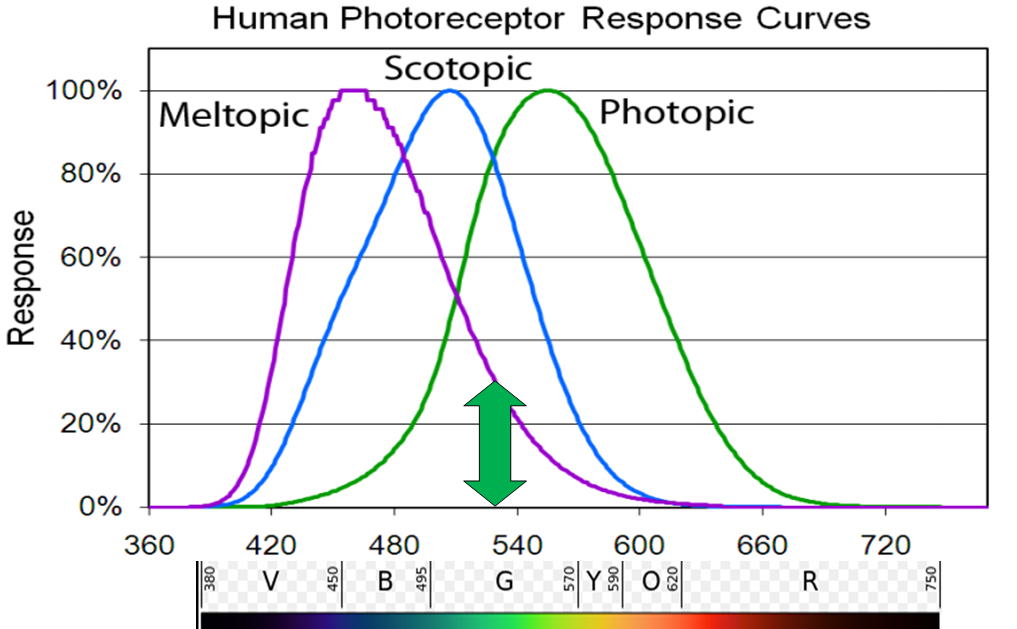 Can I Just Turn Off the Blue Pixels and Skip Wearing the Orange Glasses? Nope!

The green pixels on your cell phone, computer and TV screen can also suppress and delay melatonin onset and thus cause circadian disruption.

My new cell phone comes with an app that automatically turns off the blue pixels in-between the times of sunset and sunrise. I appreciate this app because I don’t want the blue pixels firing while I am answering a call at night BUT if I were to spend anytime more than mere seconds looking at that screen at night, I would only do so while wearing LightForFitness Orange Eyewear, because the green pixels on that screen will cause circadian disruption.

A very helpful paper was written: Spectral Identification of Lighting Type and Character.

In this paper there is a graph which I borrowed and placed below.

I added to this graph an arrow (the bold green up-down double arrow) and also I added the ‘rainbow” color spectrum, so wavelengths in nanometers can be readily understood as commonly recognized color names (such as red, orange, etc.) for the sake of persons who are not familiar with light colors when they are expressed as wavelengths from 360 nanometers to 720 nanometers.

What this graph is simply stating is that the human eye DAY-TIME vision system (see the Photopic curve shown in green) experiences the color yellowish-green (approximately @ 555 nm) as the brightest color. This curve further illustrates the Photopic (day-time) eye sensitivity to all the other wavelength colors RELATIVE to its peak sensitivity to the color yellowish-green 555 nm.

This graph is also stating that the human eye NIGHT-TIME vision system (see the Scotopic curve shown in blue) experiences the color blueish-green (approximately @ 515 nm) as the brightest color. This curve further illustrates the Scotopic (night-time) eye sensitivity to all the other wavelength colors RELATIVE to its peak sensitivity to the color blueish-green 515 nm.

Most important for this conversation, this graph is also stating that the human eye subconscious non-vision system (see the Meltopic curve shown in violet) experiences the color blue (approximately @ 460 nm) as the most stimulating color. This curve further illustrates the Meltopic (circadian rhythm) eye sensitivity to all the other wavelength colors RELATIVE to its peak sensitivity to the color blue 460 nm.

One obvious take away from this above Meltopic curve is that: any color-wavelength can cause circadian disruption if it is bright enough and is endured long enough, even red light, the second least circadian disruptive color for humans.  (Violet is the least disruptive and also possibly even anti-disruptive).

The purpose of this arrow is to highlight that the 530 nm mid-green color wavelength (which is strongly emitted by green pixels) intersects approximately on the 30% response point of the Meltopic (circadian rhythm) curve.

The LightForFitness Orange lens eyewear  blocks 99.9859% of 530 nm mid-green light.  Click here to see this demonstrated in a video.

To understand a greater detailed explanation of the light blocking abilities of the Uvex SCT Orange lens safety eyewear when compared against the LightForFitness Orange Lens eyewear, click here.