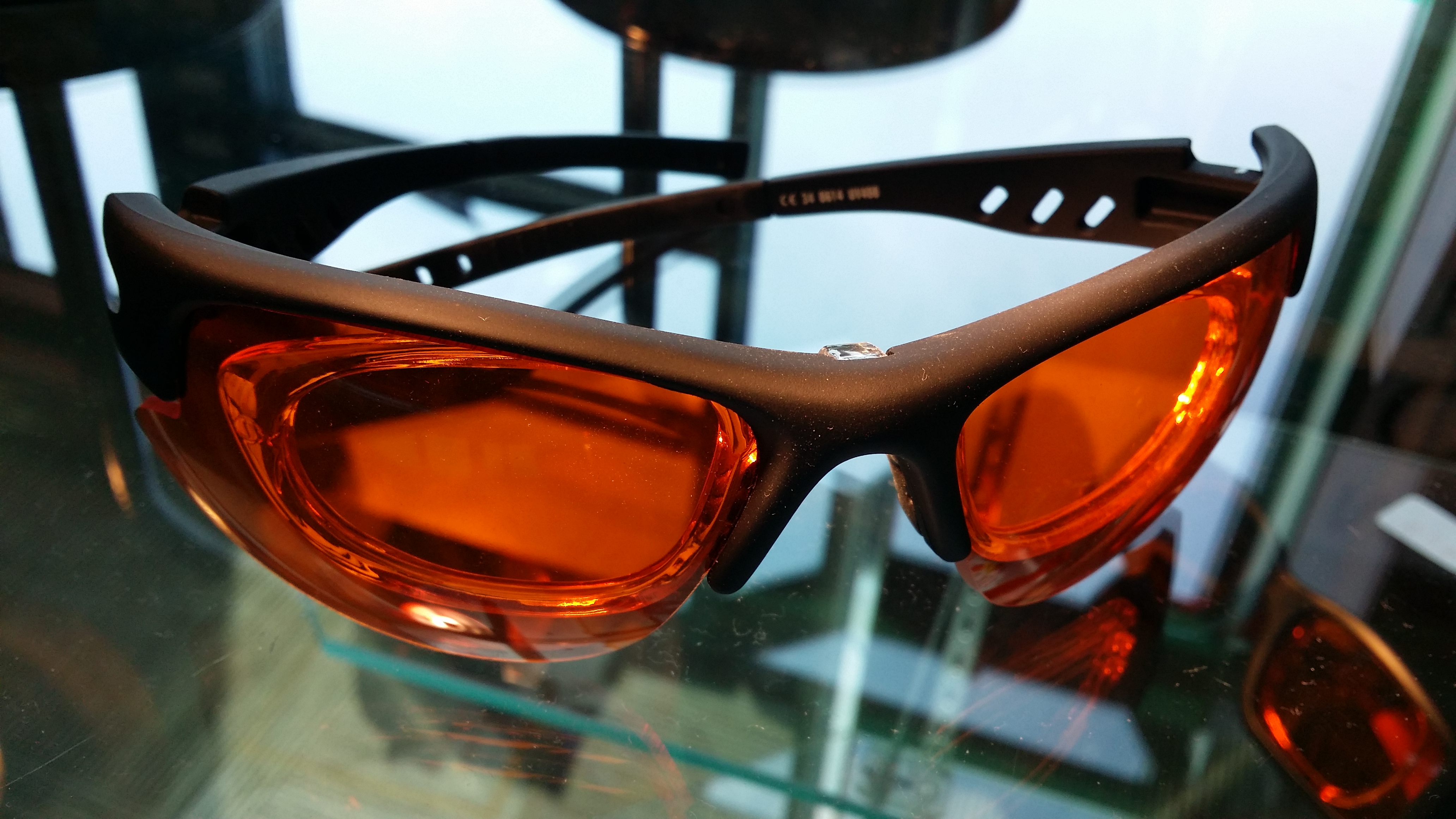 Will any pair of  “blue-blocking” glasses completely preserve evening melatonin onset? MAYBE NOT!

Will any pair of “blue-blocking” glasses ADEQUATELY preserve morning-entrained melatonin onset for a person who works a night shift? PROBABLY NOT!

The conversation below specifically focuses on the comparison of the blue blocking UVEX SCT ORANGE safety eyewear versus the LightForFitness blue blocking Orange Lens or Yellow Lens or Red Lens eyewear, so to determine which is best at “blue blocking”.

In general the following is also a discussion on the usage of  ‘blue-blocking glasses’ for typical night time sleep and their usage for the non-typical sleep time for the night shift worker.

The preservation of evening-time melatonin onset is the result of certain color-wavelengths of light NOT ENTERING THE EYE (during the evening prior to sleep time) or if these wavelenghts of light do enter the eye, they do so at VERY low intensities.  A young healthier eye will require LOWER intensities of evening light to maintain evening-time melatonin onset, than an older eye. This is because an older eye has more darkening and yellowing of the lens, which naturally blocks out more light.

YELLOW LENS GLASSES,  might adequately preserve evening-time melatonin onset for a 57 year old person watching a TV screen 12 feet away, BUT may not adequately preserve evening-time melatonin onset in a 17 year old using a computer screen a mere 3 feet away from their eyes, or a cell phone 1 foot from their eyes, as they should consider using ORANGE LENS GLASSES.

Also, a person who needs to preserve morning melatonin onset after working a night shift should consider wearing RED LENS EYEWEAR during the bright sunny trip home outside.

Different people in different situations will need different lens accommodations but for all of them it is important that the melatonin-onset eyewear they wear RADICALLY blocks the color-wavelengths of light that can disrupt melatonin-onset timing, and blue light is the primary culprit…..so blue light blocking ability is the first criteria when choosing MELATONIN ONSET eyewear, but not all blue blocking lenses are created equal in the ability to block blue light.

FACT:       ALL red or yellow/amber or orange “blue-blocking” glasses allow ALL COLORS, including BLUE to enter the eye. But in spite of this, the glasses that are effective at preserving evening melatonin onset, are so because they remove nearly almost all of the light color wavelengths that are required to be removed to preserve melatonin onset. So technically “blue blocking” is in reality “blue reducing”, and what LightForFitness sells is extremely blue reducing.

One of the BLUE BLOCKING competitors entering into the arena of the orange lens melatonin onset eyewear is the UVEX Skyper SCT Orange safety glasses. This eyewear is popular because it is inexpensive and blue blocking.  But, after reading below you will understand why LightForFitness does not sell this eyewear.  Despite the lack of endorsement by LightForFitness, these glasses were mentioned by Consumer Reports as the best pair of Blue Blockers they found among the 3 they tested.

According to Honeywell/Uvex themselves, the Uvex SCT orange lens blocks 98% of the blue portion of white light while not specifying which exact wavelengths of blue light they are referring to. So for this following conversation we will assume all wavelengths of blue light from 450 nm to 495 nm will have a 2% pass-through (transmission/transparency) for the Uvex SCT orange glasses, because this is all of the detail that the manufacturer provided.

So, how does LightForFitness  lenses stack up against the “top competition”….. the Uvex SCT orange lens eyewear?

Is this important? YES, because as light sources continue to brighten with each new wave of better technology, the challenge to adequately protect the retina from circadian disrupting light will continue to rise. Also it is impossible to know for each person and situation what magnitude blue exposure is simulating their retinas, thus to err on the side of caution the blue blocking lens should be EXTREME blocking.

Below is video and a graph explanation of how it is possible to know if one lens passes 2% or 0.02%  of blue light as both percentages would look nearly exactly alike on a Transmission (transparency) graph. You may ask how one can claim one blue blocking lens passes 409 times more blue light than another blue blocking lens when both “T” graphs appear to show that the values are zero for the transparency for blue light. Please read the explanation below

People who manufacture colored lenses often produce graphs showing how their lenses perform for each color (wavelength) and thus graphs are used to choose which lenses are good blue blockers, but not all graphs are created equally. For example below is the Uvex SCT Orange transmission graph. Transmission means the same thing as transparency.

Now compare this graph to the one below, which is the LightforFitness graph for our orange eyewear. The red line represents T% which means percent transmission or transparency. (For now just ignore the OD portion of this graph as that will be explained later.)

To illustrate the problem of trusting a graph to tell you how much better one lens is at blocking blue light as compared to another, let us select the color mid-green at 532 nm.

Why did I pick that wavelength of green? I did so because I happen to own a 532 nm green laser so we can do an experiment and video it, which will nicely illustrate the problems with some graphs. I also chose 532 nm green light because the “T” graph for both glasses (Uvex vs LightForFitness) both appear to show a value of ZERO, thus we are comparing apples to apples. Both transmission curves at 532 nm green appear to show a value of 0.0% transmission, or in other words %100 blocking at the color of 532 nm green. But, are both glasses 100%  blocking of  532 nm green light? If not, then by how much do they differ?

As you may of suspected each pair of eyewear performed radically different even though both transmission curves appear to show that both glasses will block mid-green 532nm light at 100%. I do not know what is the percentage of the green light that was blocked by the UVEX by looking at the graph provided, but it is visually obvious that it is many times inferior to the LightForFitness orange eyewear blocking of the green 532 nm light, which seemed to pass 0% of the green 532 nm light.

Regardless of what our eyes are telling us, the LightForFitness orange lens did pass a very small percentage of the 532 nm green light, but the percentage was too low to be seen with the naked eye. The LightforFitness orange eyewear above passed 0.016% (less than 1/6000th) of this green 532 nm light. Or in other words, the LightforFitness blocked 99.9874% of the green 532 nm green light.

The extremely low transmission percentage through the LightForFitness Orange lens is is knowable because the manufacturer has also provided the OD curve  (Optical Density Curve) alongside the T curve. Ok, so let’s do the math.

Again look at the graph above and see that at 532 nm the LightForFitness orange eyewear has an OD of approximately 3.9.  Had this OD number of been exactly 3.0 it would of meant that the eyewear was passing the green light to 1/1000th. If the OD number was exactly 4.0, the green light would of been passing only 1/10,000th of the green light. NOTE: the OD is a clever way of saying the orders of magnitude of passing. A scientist would express the number “1/1000” as “1E-3”, thus the order of magnitude of passing would be “-3”. Conversely,  a scientist could also say that the order of magnitude of blocking or absorbance is “3”.

Using an OD curve instead of a T curve makes sense when transmissions are close to 1%  or much much less than 1%.

As the OD of 3.9 is not an easy whole number by which through simple inspection we can immediately determine the passing percentage, so in such a case we instead simply plug the number 3.9 into the formula  100-(100*log(-3.9)) = 99.9874% and waa laaa we know the blockage percent.

Note: The green light we observed that leaked in by the Uvex SCT Orange could be the death nail for melatonin onset especially for a night shift worker wearing them during the trip home from work, hoping they will preserve their onset.

So, why didn’t Uvex provide an OD curve alongside the Transmission curve?

It is because extreme profound blocking is not the purpose of the Uvex SCT Orange eyewear, as it was designed for other purposes, as opposed to the eyewear which LightForfitness sells, which is engineered for extreme profound color blocking.

LightForFitness does not sell eyewear or filter lenses from manufacturers that do not provide OD data because Transmission curves only tell 1% of the story of how well a lens will block a specific color wavelength.

OD curves are provided only for lenses that possess EXTREME ranges of blocking versus their EXTREME passing of light color wavelengths, and these are the only kind of eyewear LightForFitness sells.

A useful link for all persons interested in using melatonin-onset eyewear would be how to use – MELATONIN ONSET EYEWEAR – simple plan .